Home | Techniques | Three come along at once A while ago, we blogged about SSK and K2tog, decreases which turn two stitches into one. We promised to get back to you with double decreases, the ones that turn three stitches into one. Because they involve two stitches, SSK and K2tog can point in two different ways: leftwards and rightwards respectively. Once you toss another stitch in there, you get a third possibility. So we have three double decreases to show you, a leftwards one, a rightwards one, and one that points straight up. Let's look at the leftwards one first. Its name, SSSK, gives a big clue to how it's done - just like SSK, but more so. To work it, put the tip of your right hand needle into the first stitch on your left as if you were going to knit it: Instead of knitting it, just slip it over to the right hand needle. Then do exactly the same thing with the next stitch - slip it knitwise. And then slip a third stitch knitwise as well in the same way. At this point, you have three unworked stitches on your right hand needle, and all of them have turned to face the other way to their companions. This orientation is what the knitwise slipping achieves, and it's important for the finished result, as we'll see. Now poke the tip of the left hand needle through the fronts of the three stitches, as in the following picture, and knit all three together through their back legs: When you've done this, you'll see that you've reduced the three stitches to one, and that the rightmost of the three is lying on top of the other two, so that the entire edifice leans over to the left. What's more, the legs of the three stitches aren't twisted, because the knitwise slipping reoriented them. That's SSSK. K3tog, our next demonstration, is also just like its k2tog relation. It's even simpler than SSSK: just put your right hand needle through three stitches at the same time: Then you just wrap the yarn exactly as you would with any other knit stitch, and pull the new stitch through: When you look at the result, you'll see that you've reduced your three stitches to one again, but this time the leftmost stitch is the one lying on top of the others, and the decrease is pointing over to the right. The last of our three double decreases is the one that points neither to left nor to right, but straight up like a little knitted arrow. It's a wee bit more fiddly to work, but it's well worth it. We'll call it CDD here, for centred double decrease. The first step is to slip two stitches knitwise from the left to the right needle. Put the tip of your right needle through the first two stitches, working from the left: 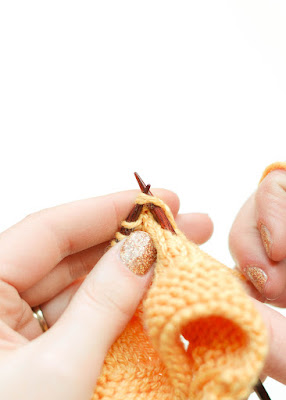 Nothing happens to the third of the three stitches at this point, and to be honest the two that you've slipped look a little odd. Bear with this for a moment. Moving right along, though, you now just knit the third stitch. Then put the tip of the left hand needle through the fronts of the two stitches that you slipped... ...and hoosh them up and over the stitch you just knitted. The motion's rather as if you were working a cast off, except that you're manipulating two stitches over one. And that's your CDD done. When you look at the result, you'll see that the middle stitch of the three is lying on top of the other two, pointing straight up. When you compare all three of them side by side, the differences are obvious: K3tog on the left, CDD in the middle, and SSSK on the right: And when you combine all three directional double decreases, you can work wondrous things like the flowers in the shawl at the top of this post (we blogged about this gorgeous thing here). They're fun and they're easy, and the finished results are ever so satisfying.

Making eyes at you In pattern