The Irish Times Best Shops Competition has just been launched again for 2016. As ever they are seeking nominations across a number of categories for the best independent retailers in Ireland. We've been fortunate enough to have made the short list of finalists in previous years, and we're honoured that you, our amazing customers, have taken the time to vote for us in the past. This year we have our eye on the newly-introduced category of Best Family Run Shop, and if you think we deserve the accolade then we would really appreciate your nomination. While Jacqui and Lisa launched This is Knit back in 2006, the mother-daughter arrangement has since become mother and two daughters, when Jenny joined the team in 2012. Each of us brings our own personality and set of skills to the shop, but one of the most tangible additions in recent years has been the stunning skeins that Jenny creates under the "Townhouse Yarns" brand name. 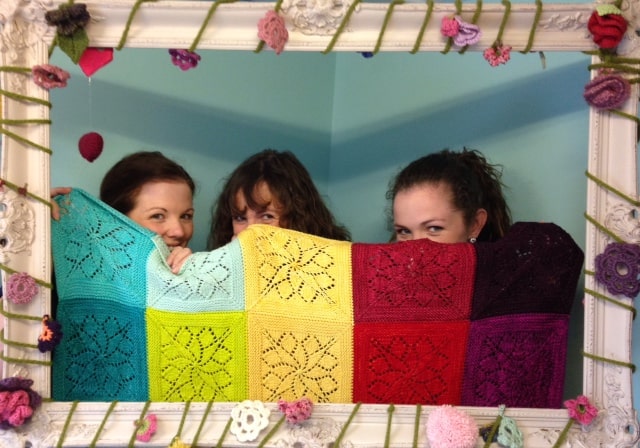 And of course the family input doesn't stop there - many of you will have met our bearded barmen at customer evenings (otherwise known as Liam (or "Dad") and Ronan (Lisa's husband)). They also play a back up role as general handymen, but possibly find those jobs a little less enjoyable! And then of course there are the trainees in the ranks, with Lisa's two young boys, the older of which has already received "training" on the tills and played a supervisory role at the RDS in 2014! Together with our wonderful staff (who we like to think of as family members too) we try to run a warm, welcoming shop full of fabulous fibre temptations. Do you enjoy visiting our shop and chatting with us about all things yarn? Does a wander around our colourful shelves brighten your day? If so then we'd really appreciate your vote. BRITISH KNITTING AWARDS It's certainly competition season! The lovely people at Let's Knit Magazine have a special category in the British Knitting Awards: "Best Local Independent Yarn Store - Ireland" We have secured the title in 2014 and 2015, and would love to make it a hat trick! Your vote can be cast here (and you don't need to vote under every section, you can skip questions by ticking the 'other' box and writing â€˜N/Aâ€™ in the space available). Voting closes on 28th August Thanks everyone!